Once in a while an idea comes along that is the result of a long incubation, embracing the labors and thinking of the past while opening doors for fresh opportunity in the future. The best yet example is the concept of Permaculture that started to show up around the farm in letters and comments about a year ago, now it a valued toolbox in our thinking for the Windekind/Commons project.

The word permaculture is a contraction of “permanent” and “culture,” originally coined by two Australians, Bill Mollison and David Holmgren, who was Mollison’s early student. Mollison says “that the original premise for permaculture came to him in 1959 when he was observing marsupials (pouched mammals like the Wallaby’s and Kangaroos) in Tasmanian rain forest and was awed by the “life giving abundance and rich interconnectedness of that ecosystem.” From his observation, Mollison made an important conceptual leap, writing “ I believe that we could build systems that function as well as this one, ” Guided by nature, Mollison’s thinking jumped into the realm of believing that humans could design systems that could be as abundant and as rich those in nature.

The next break though came in the 1970s, when Mollison and Holmgren, using what that they had observed in nature and in indigenous cultures, began to identify the principles (i.e. locating elements for functional interconnection) that made those systems so rich and sustainable. Then, they went the next step and applied these principles to the challenge of designing sustainable landscapes. Holmgren’s undergraduate thesis, that he and Mollison revised, evolved into the groundbreaking book Permaculture one, published in 1978.

Today, permaculture is widely viewed as a set of tools for designing landscapes that are modeled on nature yet include humans. Since permaculture is grounded in nature many people come to permaculture through their love of plants, gardening and animals, as we did, confirming what we have learned all along from observation and practice. But, permaculture is about far more then gardening, the approach has a breathtaking scope. For example, we use these principles to design buildings, lay out a village, create an energy systems and even less tangible applications like designing a decision making process, an educational curricula and business development. 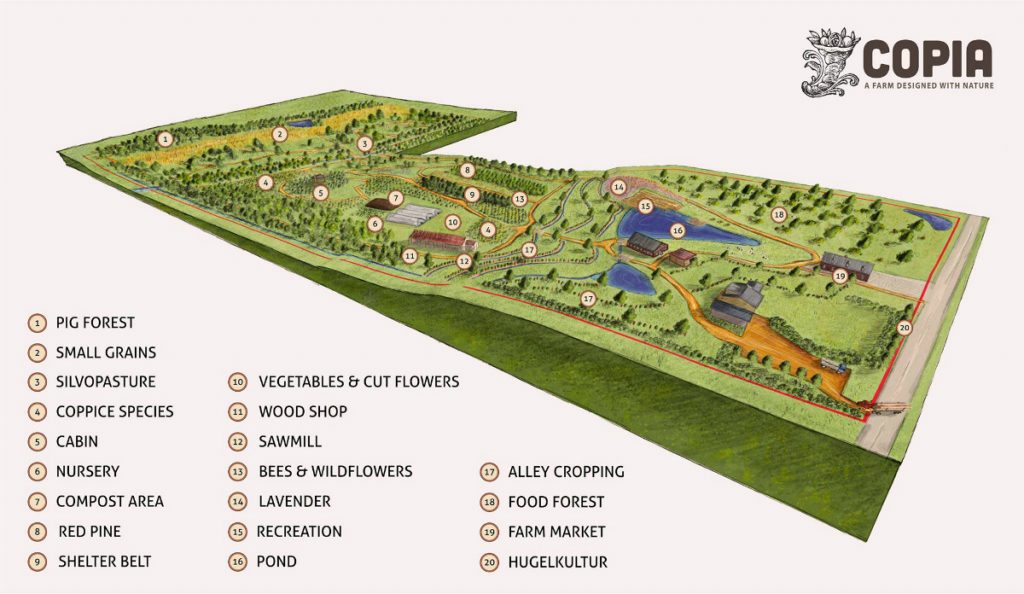 The image above is a good example of permaculture design applied, note the amount of variation in this landscape including the attention given to human functions like recreation. There are also many connecting features like paths, and water ways.

Traditionally, western culture has used reductionism as a way to simplify decision-making. This is considered helpful, as trying to take everything into consideration in a more holistic approach can slow down and even stalls decision-making, but often reductionism denies us the opportunity to see a richer and more complete scope of life. For example, a reductionist approach to human health may be to just to look at body weight as indicator of health, putting aside such factors as diet, exercise, stress, and genetic factors. Holistic thinking on the other hand seeks to keep as many elements as possible in the decision making process without becoming overwhelmed.

Permaculture thinking is whole system design grounded on ethical standards. For example, the construction of a home utilizing these principles entails not only questions about cost, square footage but in addition a host of interconnectivity questions like how trees could cool the structure in the summer and warm in the winter, how the energy systems utilized in the house reduce global warming and therefore contribute to the ethic of protecting the planet or how the location and architecture of the structure contributes a sense of neighborliness.

How does permaculture do this? Permaculture is a linking science that focuses more on the relationships between objects then on the objects themselves. Like architecture and engineering, it takes a design approach  informed by ethics, for example, “living within our ecological means. ” It also follows nature’s patterns because these patterns are nature’s elegant way of solving problems efficiently and effectively. These relationships are what turn a collection of unrelated parts into a whole functioning system allowing its strongest and most unique properties to emerge in connection with one another.

For example, at Windekind/Commons we are now trying to blend our plantings into communities that contain “enhancing partnership” between plants. Using nature as a guide we try imitating and building on the natural associations and patterns of found amongst plants, insects, animals and humans. These patterns of associations are called Guilds. Here we are starting “apple tree guilds” by planting a ring of attractive and grass suppressing bulbs around the tree enclosing flowering and food producing plants under the tree that also provide mulch and habitat for useful insects. The apple tree, nurtured by this community of multifunctional plants and insects means more growth, food and flower with less work and I can happily join this guild enjoying its shade and color. 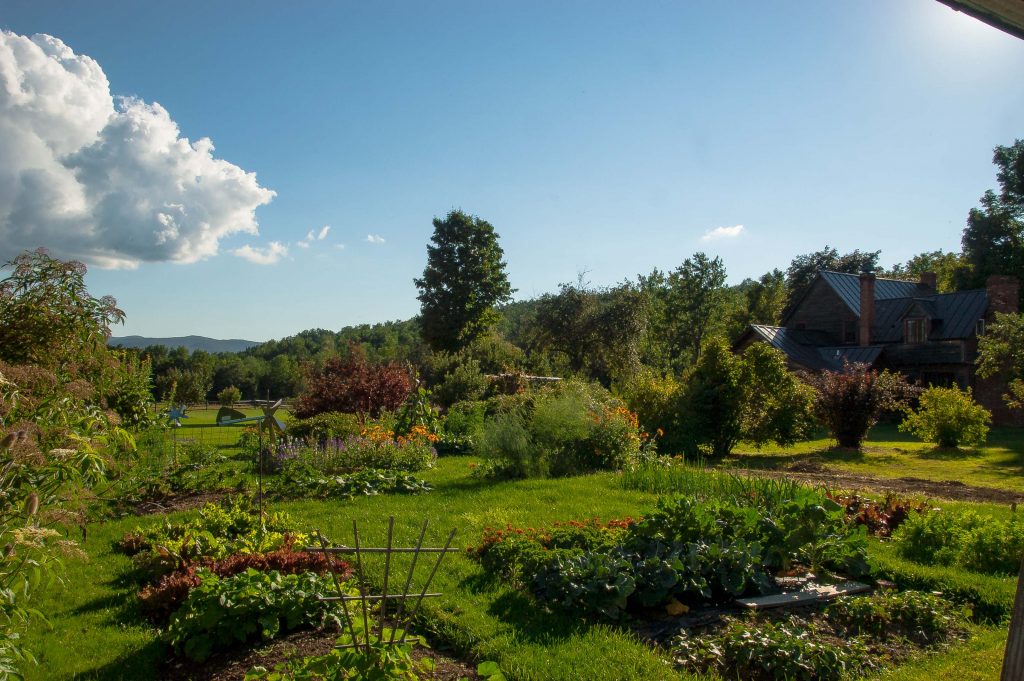 Above, is a current picture of the vegetable garden at the farm illustrating some diversity where we hope to incorporate more in the future. Stay tuned

I liked this image, downloaded, online, because of the guilds formed here including plants and careful placement of tress. In addition, from an aesthetic perspective, it is a very pleasing garden. Many of the beds appear to have multiple uses.

Permaculture is not a discipline within itself but rather a design approach based on connecting and melding different disciplines, strategies and techniques, in this sense it is a toolbox utilizing a broad range of well techniques and approaches many of which, like composting, have deep historical roots in ancient cultures.

Although there are certain methods used there are few, if any, techniques that belong only to permaculture because permaculturists employ a broad range of techniques from many disciplines providing these techniques are based on permaculture principles like enhancing diversity and insuring that each element performs multiple functions as, for example, a house has the function of providing shelter but it can also be a place that provides beauty.

At the Windekind/Common one of the communities core principles is to seek diversity by maintaining “an environment that welcomes and nurtures all ages, providing “village” support to parents in meeting the demands of raising a family, and to elders. “ One tool we use to enhance diversity is to utilizing a process called “living design” in developing the community in which members actively participate in the design of their own homes and the larger Commons community, this is similar to the design process in our gardens where we also seek to create harmony between different and multifunctional parts, loving diversity is the motivational engine that lets us do that.

Another example appears in the map below: The placement of environmental and social elements (i.e. trees, open space, plants, buildings) is fundamental to the whole system design approach at Windekind/Commons. One tool we use to implement this approach was to break the areas of the farm into zones; zones are designated areas that tend to emphasize key environmental and social elements that succeed best in that area. Then, ongoing design and planning comes into play as we sit down, as a community and evaluate which elements are best suited for which area and the optimal relationships between elements. 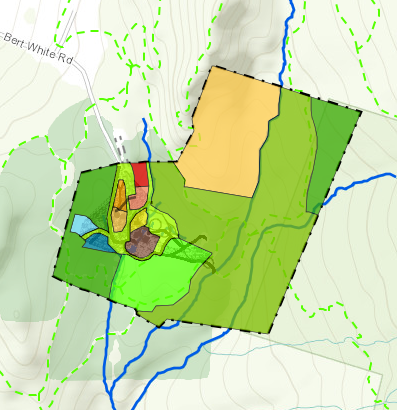 The map to the left, created by Aaron Worthley of Arrowwood Environmental, is our evolving effort to create a master plan for the Windekind/Commons. One of its features that is not evident here is that it is created in layers in allowing features to be added or deleted. The layering lets us see bette the impact of one element on another, for examples the location of wetlands, ponds and waterways that are not shown on this version.

This map shows very well the concept of zones, explained above,  depicted by different gradations of green. In all there are six zones  ranging from house interiors as zone 1 to the broader community as zone 6.

If you click here: Arrowwood the complete map program will come up and you can see the layers and many other features. Please contact me if you need help with the navigation.

To read more about the details included in each  zone go to the blog post entitled Further Ventures into Permaculture.